Lithium has become one of the metals of electromobility. Where this lithium will come from is key, since the logic behind the drive for electromobility is to generate more sustainable technologies. It is therefore crucial that the lithium used for electromobility is developed not only to high environmental standards, but that it is produced in an appropriate economic and social context.

The view that metals cannot be considered as commodities in terms of their level of sustainability has begun to permeate the automotive industry. Today it understands that the driver that motivates its customers to switch to the electric car is precisely the growing concern of society for the protection of the environment and the multiple social dimensions.

In recent times, criticisms have been heard about the sustainability of the lithium produced in Chile, in particular with respect to the exploitation of lithium in the Salar de Atacama. These criticisms not only reflect a lack of knowledge of the production process, but also a partial and non-holistic vision of sustainability and its three components: economic, environmental and social.

Regarding the economic component, it is common knowledge that the Salar de Atacama is considered the most competitive lithium mineral deposit in the world.

With regard to the environmental component, Chile complies with high international standards in the environmental field. For their part, the two companies that currently carry out the extraction from the Salar de Atacama are listed on the New York Stock Exchange. This forces them to have a level of regulation with the highest standards of quality, monitoring and control, as well as transparency in the fulfillment of all their environmental commitments.

Thus, for example, the use of water in the production process, one of the most frequent environmental criticisms made to the production of lithium in the Salar de Atacama, is carried out on a rational and efficient basis that allows both the consumption of fresh water as the water footprint is barely half that required to produce lithium from spodumene ore (associated with lithium produced in Australia and China).

Finally, regarding the social component, few lithium-producing countries have the high standards of transparency and institutional respect and monitoring for human rights, which apply in Chile.

The future of the electric car depends on demonstrating that the metals used in its manufacture are produced in a sustainable way, and in this sense, Chilean lithium is probably the most sustainable lithium supply available in the world.

There is tremendous potential in the lithium industry

What specifically convinced you about this project in Australia?

There are a number of factors. The first is the quality of the natural resource: it is very large and has a high lithium grade, which allows us to think about future expansions beyond the initial 50.000 tons that we hope to achieve in this first stage.
The second reason is that, according to our studies, the project is very cost-competitive, which is in line with our idea of always being very low-cost producers
Third, Australia is an ideal country to do a project like this. It is a safe jurisdiction to do business, it is a mining country with clear regulations, and it has experience in developing similar projects.
And fourth, the quality and experience of our partner. Wesfarmers is a great company and perfectly complements the capabilities we have. This makes our JV very beneficial for both of us.

Will you remain partners with Wesfarmers Limited or does this joint venture have an expiration date or is it only for part of the project?
Our partnership with Wesfarmers is going very well and we complement each other perfectly. There is tremendous potential in the lithium industry and in Australia in particular, and we believe that together we can add value in these challenges.

Is the lithium to be processed in Australia of better quality than Chilean lithium, and what is the proportion of exports from Chile and from Australia once MT Holland is operating?
The natural resource at Mt Holland is different from that of the Salar de Atacama. It is a solid mineral called spodumene, but the quality of the product to be produced will be the same, as this is the quality demanded by the end customer. At SQM we have many years of experience adding value to our products and especially to lithium, refining it to the highest degrees of purity that allow it to be used in state-of-the-art batteries. What we will do in Australia will not be different from what we do in Chile in that respect.
Regarding volumes, in Chile we are working on an expansion to reach 180 thousand tons. In Australia, we will own 50% of 50 thousand tons, so it is clear that in this first stage, the proportion in Chile will continue to be much higher.

What are the lithium demand projections that you project for the next five or more years, and what explains this boom?
Our projections indicate that demand in 2025 could be between 800 thousand and 1 million tons of LCE. By 2030, there are scenarios that indicate that demand could exceed 2 million tons of LCE. This indicates an average annual growth of close to 20%, which is very significant and hard to see in other minerals.
The big growth driver is the penetration of electric cars. In 2020, the number of electric cars sold worldwide was just over 3 million units. In 2025, we expect more than 13 million. By 2030, about 30 million, which means a 10-fold growth in 10 years.

And will SQM be able to organically absorb some of that increased demand, or will more projects or purchases necessarily follow?
We are working for that. In Chile we expect to grow from 70 thousand to 180 thousand tons of LCE and in parallel we are going to develop this project in Australia. This growth represents a tremendous but necessary effort to continue supplying this growing market.
Above all, we are always evaluating alternatives where we can add value.

In addition to Chile and Australia, in which other countries are you prospecting for new lithium exploration?
We have not closed ourselves to initiatives in other jurisdictions. We have evaluated projects in several countries. When we find something where we can add value, we will inform you in due course.

You recently announced a deal with a division of LG, are more such contracts on the way, when should they be announced?
We continue to work on different commercial solutions for our different customers. One of those solutions is long-term contracts and, therefore, we are evaluating executing more of them in the coming months. The important thing is that these contracts are beneficial for everyone involved

Regarding the environmental claims you have in the Salar de Atacama, doesn't it jeopardize the future of your operation?
Sustainability is a fundamental issue for the company. So much so that a few months ago we announced an ambitious sustainability plan that has very important commitments to significantly reduce the use of inland water in all our operations; brine extraction in the salar; and to achieve carbon neutrality in our lithium operations by 2030, in addition to deepening our ties with local communities. The implementation of this plan is underway and we are incorporating new international standard certifications to meet our goals.

What is the environmental care you are taking in Australia, so that something similar to what is happening in Chile does not occur?
Australia, like Chile, has very demanding environmental legislation and institutions and therefore the project has considered all the necessary studies and measures to respect the environment. On the other hand, Wesfarmers has the same vision as us in matters of sustainability and therefore we are already evaluating various mitigation and improvement measures to make this project have the least possible impact on the community and the environment.

Will SQM set up an office in Australia, who will be in charge of that operation?
SQM has already had an office in Australia for several years, but the execution of the project and subsequent operation will not be the responsibility of any of its partners, but of Covalent Lithium, which is the partnership we have with Wesfarmers. 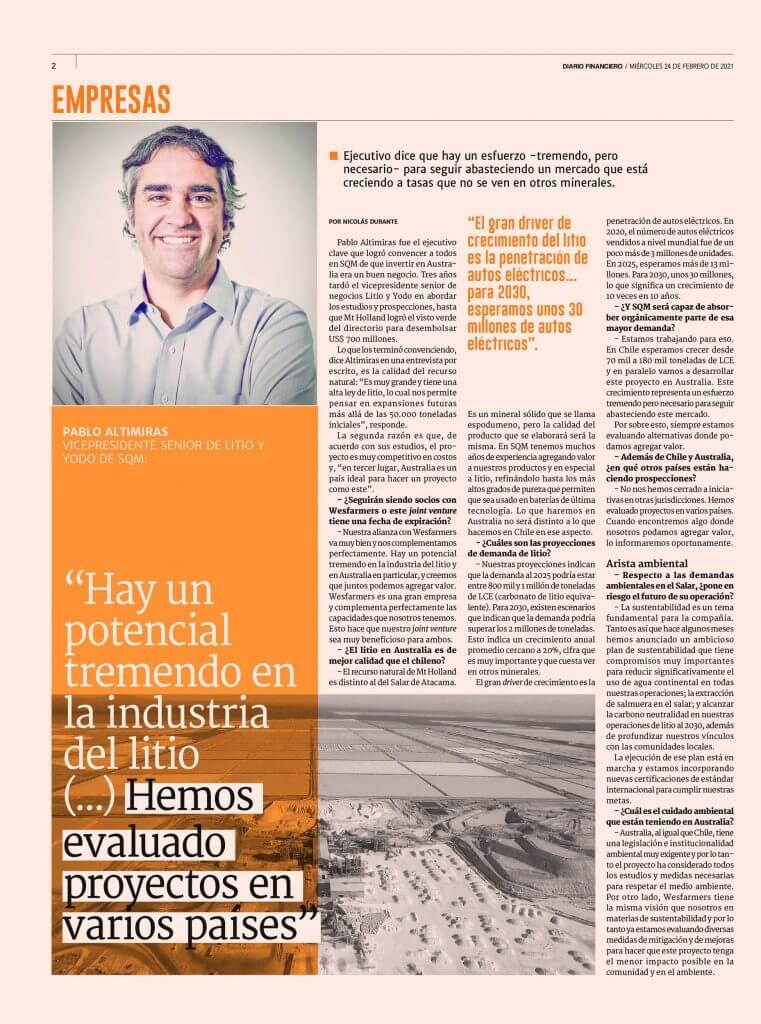 This website uses cookies to improve your experience while navigating through the website. Out of these, the cookies that are categorized as necessary are stored on your browser as they are essential for the working of basic functionalities of the website. We also use third-party cookies that help us analyze and understand how you use this website. These cookies will be stored in your browser only with your consent. You also have the option to opt-out of these cookies. But opting out of some of these cookies may affect your browsing experience.
Necessary always Enabled